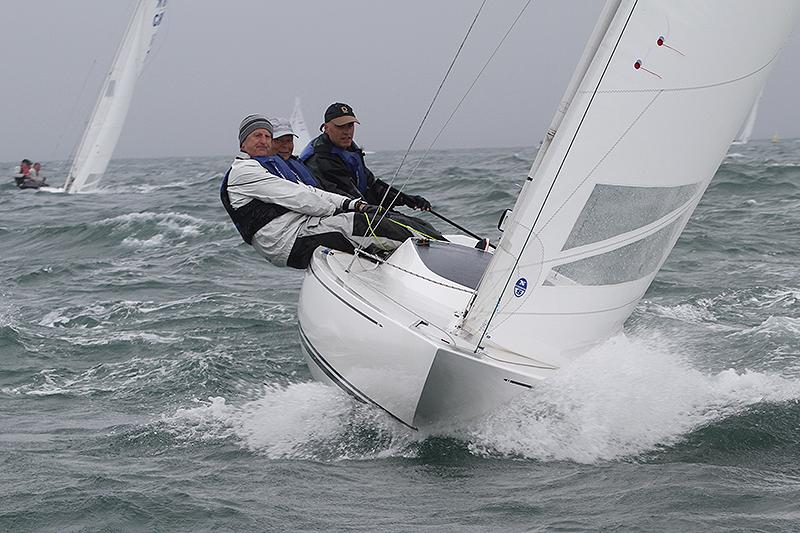 Conditions were wet and wild on the third day of the 2016 Dragon Edinburgh Cup, supported by Gwynedd Council and the ‘Wales 2016 Year of Adventure – Snowdonia Mountains & Coast’, at the South Caernarvonshire Yacht Club in Abersoch.  The forecast predicted rain, poor visibility and plenty of wind and that’s exactly what the fleet got.

The 18-20 knot south-westerly kicked up quite a swell against the ebbing tide, creating an upwind dilemma for the tacticians who had to decide between sailing in the relatively flat water on the right hand side of the course or heading left out into the faster current but much bigger seas. Another dilemma for everyone was finding the marks as the visibility was so poor that at times you couldn’t even see the rest of the fleet, never mind either end of the course. 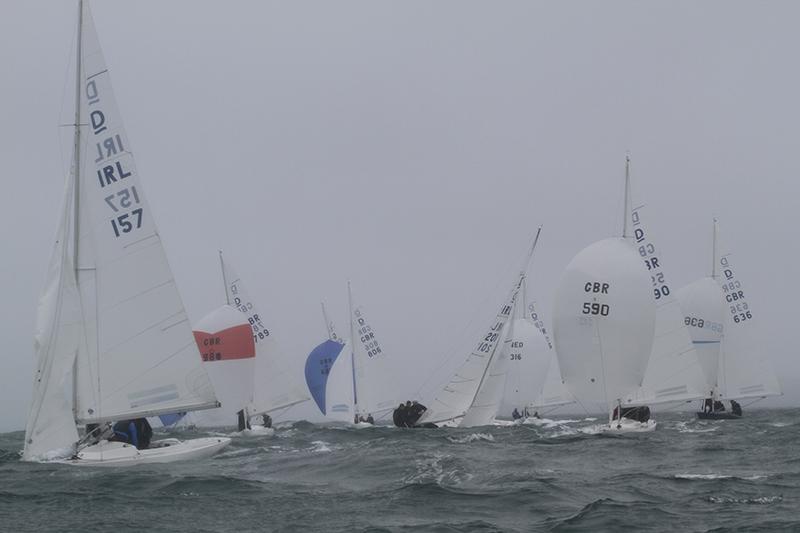 Revelling in the conditions was Neil Hegarty sailing IRL176 Phantom with Peter Bowring and David Williams. After a rather slow start to their regatta this very experienced trio found their form today and despite constant pressure from the chasing fleet sailed a superb race. Asked what gave them the jump Neil said;  “We won the pin. We thought that the tide was ebbing so going out left would be best, plus we had some space down there and clear wind.” 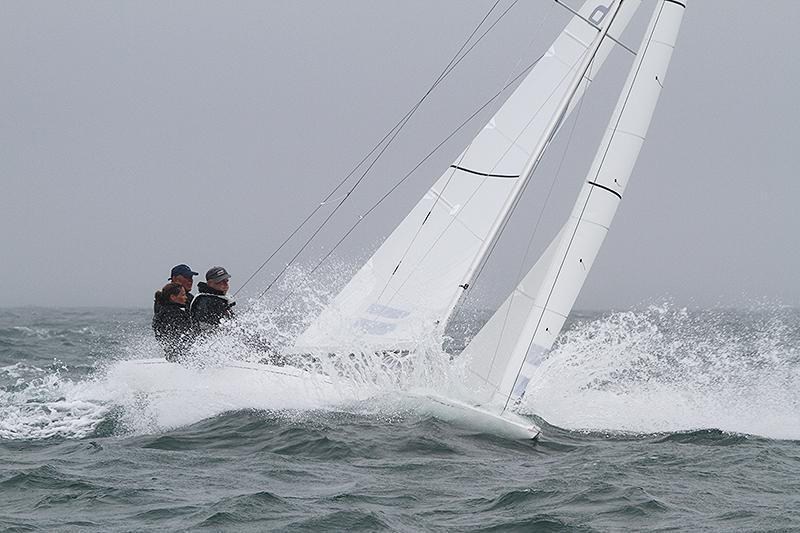 In the overall standings Smith now leads by three points from Gordon but his lead is not unassailable and if Gordon wins tomorrow’s race Smith must finish sixth or above to claim overall victory. Budd goes into the final day in third place, 8 points off the leader, putting victory out of reach but leaving the door open for move up to second. Martin Byrne, sailing IRL 201 Jaguar with Adam Winklemann and Donal Small, is also still in with a chance of a place on the podium so it’s going to be an exciting finale tomorrow.

The Corinthian Division for all amateur crews will also be decided on the final race with Mike Budd currently leading the fleet by two points from Rob Campbell, sailing GBR788 Quicksilver VI with Paul Fletcher and Luke Malissa. Mark Dicker sailing GBR610 Rackham with Selina Dicker and James Campbell is one further point back in third, while today’s race win puts Neil Hegarty firmly in contention for a Corinthian podium finish too. 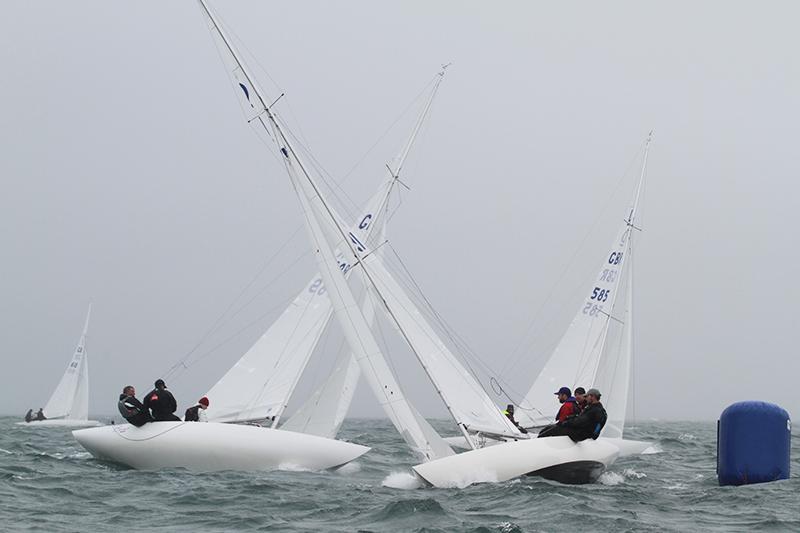 Mark Dicker and Rackham are also leading the Vintage Class for boats more than 20 years old.  He has a four-point lead over second placed Peter Marchant who is sailing GBR746 Beauty & The Beast with partner Katie Cole and Andy Biddle, while third in the Vintage class is GBR655 Phormerly Phanton sailed by Chris and Selina Thomas and George Bind-Jones.

The regatta concludes tomorrow, Friday 5 June, with a final championship race starting at 11.00. There is a last start cut off time of 12.00, but with the weather forecast promising 15 to 20 knots from the west-south-west the race committee should have no problem getting them underway in time.

Close observers may have spotted that the results are littered with crews who share a common surname. The Dragon is a boat that gets into your blood and entire families and multiple generations find themselves infected with Dragonitis. 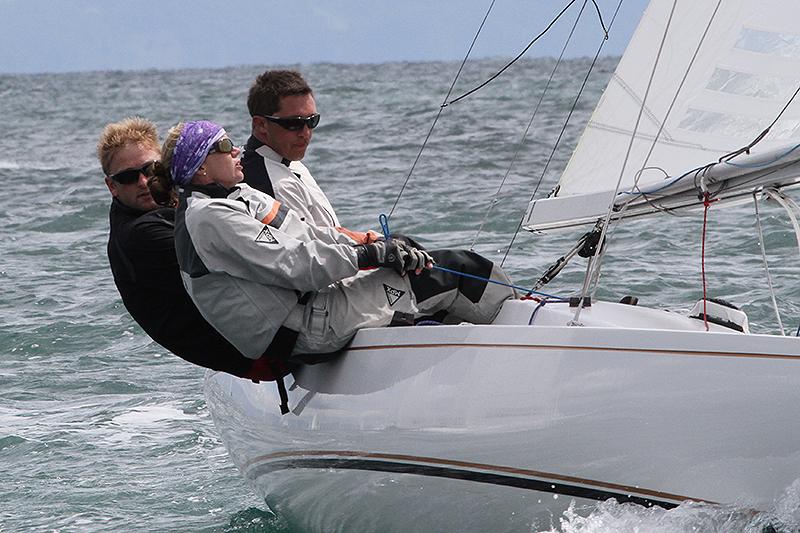 A classic example of genetic Dragonitis among those racing this week is the Rackham team. Helm Mark Dicker and his sister Selina are third generation Dragon sailors and their crew James Campbell is not only their cousin, but is also a second generation Dragon sailor himself. Team Rackham also dispel the myth that you have to be an old man to race Dragons as all of them are very much still in the first flush of youth.  Indeed, Mark has even brought his foiling International Moth to Abersoch and is to be found buzzing back and forth in front of the club after racing each day.

Husband and wife teams are also very common in the fleet and this week’s top performing couple is currently Oliver and Francesca Morgan, who are racing GBR791 Christianna with North Sail’s Nigel Young.  Francesca’s week got off to a slightly sticky start when she slipped overboard in big waves at the weather mark on the final day of the Northern Championship warm up event. Fortunately, husband Oliver saw her go and managed to grab hold of her before she became separated from the boat. “Unfortunately the bit he got hold of was my foot and I found myself being dragged along with my head underwater, increasingly concerned that I might drown!” laughed Francesca. Luckily she is made of strong stuff and she managed to haul herself up on the spinnaker sheet allowing Oliver to let go of her leg and drag her back aboard.  Undeterred she has been back out there this week and they go into the final day in ninth place.

2016 is the 60th anniversary of the founding of the British Dragon Association and to mark the occasion the Abersoch Dragon Fleet invited the Edinburgh Cup competitors to join them for a spectacular Cocktails and Canapes Party on Wednesday evening. The party featured copious quantities of Taittinger Champagne and delicious canapes which had been home made by the members of the Abersoch fleet and South Caernarvonshire Yacht Club. Naturally what goes on tour stays on tour, but suffice it to say that a good time was had by all.

Current British Dragon Association Chairman Tim Wilkes took the opportunity to make a very special presentation. The BDA is a volunteer organisation run for the members by the members and many people give up their time to support and manage the class and its events, but few people have made such a long and dedicated contribution to the BDA as the recipient of Tim’s special award. 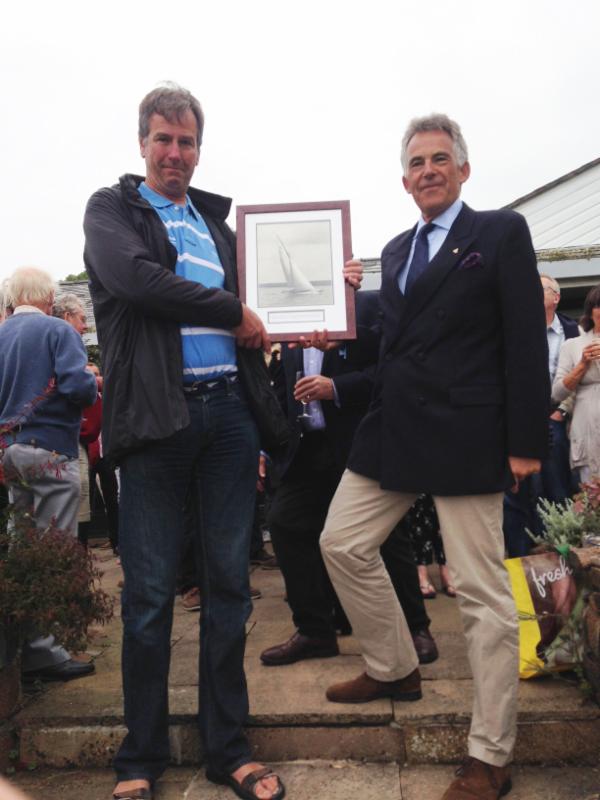 For twenty years, exactly one third of the time that the BDA has been in existence, Owen Pay has been an officer of the class. In that time, he has filled many roles including Class Secretary, Class Chairman and Solent Fleet Captain. His enthusiasm is infectious and he has been a major player in ensuring the ongoing success of the Dragon in Great Britain.  He has organised many of the fleet’s major championships, represented British interests to the International Dragon Association, encouraged new members to join the fleet and buy boats, helped to spread the word of Dragon sailing far and wide, and hosted many a fantastic Dragon party!

In making the presentation to Owen, Tim explained that he could not do so without also paying tribute to the woman who has been Owen’s administrator, general factotum, sounding board, frequent crew and all round support network for almost all of that 20 years – his lovely wife Josey who sadly cannot be here this week. Owen and Josey are a formidable team (and formidably good fun) and the BDA owes them a huge debt of gratitude. On behalf of the BDA and its members Tim presented Owen with a beautifully framed black and white photograph of K1 – the very first Dragon owned in Britain – sailing on the River Crouch in the early days of the class.